Extraterrestrial water was found in a meteorite that fell in the UK last year, according to a report by Sky News on the 17th local time.

The meteorite, which crashed into a driveway in the Gloucestershire town of Winchcombe in February 2021, is reported to have provided clues as to where the water in Earth's vast oceans came from. 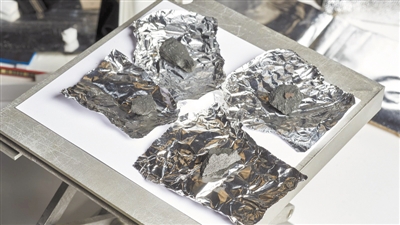 Fragment of a meteorite that fell in the British town of Winchcombe in 2021. Image source: Sky News

Ashley King, a researcher in the Planetary Materials Group at the Natural History Museum, said about 12 per cent of the meteorite samples consisted of water, which is "very, very similar" to the composition of water in Earth's oceans. Evidence that if asteroids and celestial bodies like the Winchcombe meteorite fell, it would make a very important contribution to the Earth's oceans."

Dr King also confirmed that this is the first time a meteorite containing extraterrestrial water has fallen in the UK. Because the 0.5-kilogram meteorite was quickly recovered within 12 hours of its fall, it was also the least contaminated sample ever collected.

Where does the water on earth come from? There are hypotheses that comets or asteroids are the main source. Dr King said the data showed that the water on the comet did not match the water on Earth, while the composition of the water in the Winchcombe meteorite was a better match, meaning asteroids, or carbonaceous asteroids, were likely both in the inner solar system and on Earth. main water source.

Analysis showed that the meteorite came from an asteroid near Jupiter. It formed about 4.6 billion years ago and took about 300,000 years to reach Earth.

Currently, there are about 65,000 known meteorites on Earth. The meteorite found in the town of Winchcombe is the first known carbonaceous chondrite in the UK and the first to be found across the UK in 30 years.