On October 14, 2020, Ranga Dias, a physicist at the University of Rochester in the United States, and his colleagues published an article in the journal Nature that shocked the entire physics community and appeared on the cover of the current issue. They claim to have discovered a new type of hydride that enables superconductivity to be observed at temperatures as low as 15°C.

"This is the first time humans have achieved room temperature superconductivity!" However, this landmark research was retracted by Nature on September 26. The long-standing doubts about this article have finally come to an end for the time being.

This retraction is unusual, because Nature's editors took this action despite the strong opposition of all nine authors of the paper, which can be said to be very decisive.

On the day of the retraction, Science News reported on the incident, saying the study had "serious problems."

On the day of the retraction, Science News reported the incident

Superconductor is a very important revolutionary material, which has emerged in the fields of MRI nuclear magnetic resonance, particle accelerator and so on.

In recent years, more and more superconducting materials have come out, and they are constantly refreshing the critical temperature.

The paper, published in Nature, announced that they had created the first superconductor that did not require cooling to make resistance disappear, achieving room temperature superconductivity for the first time. This directly opens the door to a new world.

At higher pressures than the Earth's center, hydrogen is thought to behave like a superconducting metal. Adding other elements to hydrogen -- forming a hydride structure -- can increase "chemical pressure," reducing the need for external pressure and enabling superconductivity in small laboratory vessels called diamond anvils. As theoretical physicist Lilia Boeri of Sapienza University in Rome puts it, "These hydrides are a realization of metallic hydrogen at slightly lower pressures."

In 2015, Mikhail Eremets, a physicist at the Max Planck Institute for Chemistry in Germany, and his colleagues reported the first superconducting hydride: a mixture of hydrogen and sulfur, at enormous pressure and at a criticality of 203K (about -70°C). At temperature, the resistance drops sharply. This temperature is nowhere near room temperature, but higher than the critical temperature of most superconducting materials. Some physicists believe that adding a third element to the mix would give researchers a new variable, allowing them to get closer to ambient pressure -- or room temperature.

In this 2020 Nature paper, University of Rochester physicist Ranga P. Dias and his colleagues added carbon and loaded a hydrocarbon-sulfur mixture into a diamond anvil, a device that generates ultra-high pressure, under pressure In this state, a laser is used to excite the sample to undergo chemical reactions, and finally a new substance is created. They report that tests showed a sharp drop in resistance or even disappearance at a temperature of 288K (about 15°C) and a pressure of 267GPa (equivalent to 2.6 million times atmospheric pressure).

In addition to the disappearance of resistance, scientists have found another key to superconductivity—the substance shields magnetic fields at transition temperatures, an important fundamental feature of superconductors.

The development of superconducting materials that have zero resistance at room temperature and are completely diamagnetic is a dream of physicists. So the acceptance process of this paper is also very smooth. The Nature editorial received this article on July 21 and on September 8. The article has been cited 363 times so far.

Once the paper was published, it immediately caused a lot of controversy. Later, the author corrected the article on November 20, 2020. On January 31, 2022, the authors made the raw data related to the magnetic susceptibility measurements in the paper available on the preprint platform.

On February 15, 2022, Nature attached an editorial note to the paper, stating that it is investigating data issues in the paper, and readers are advised to exercise caution when citing.

On September 26, the paper appeared to have been retracted. 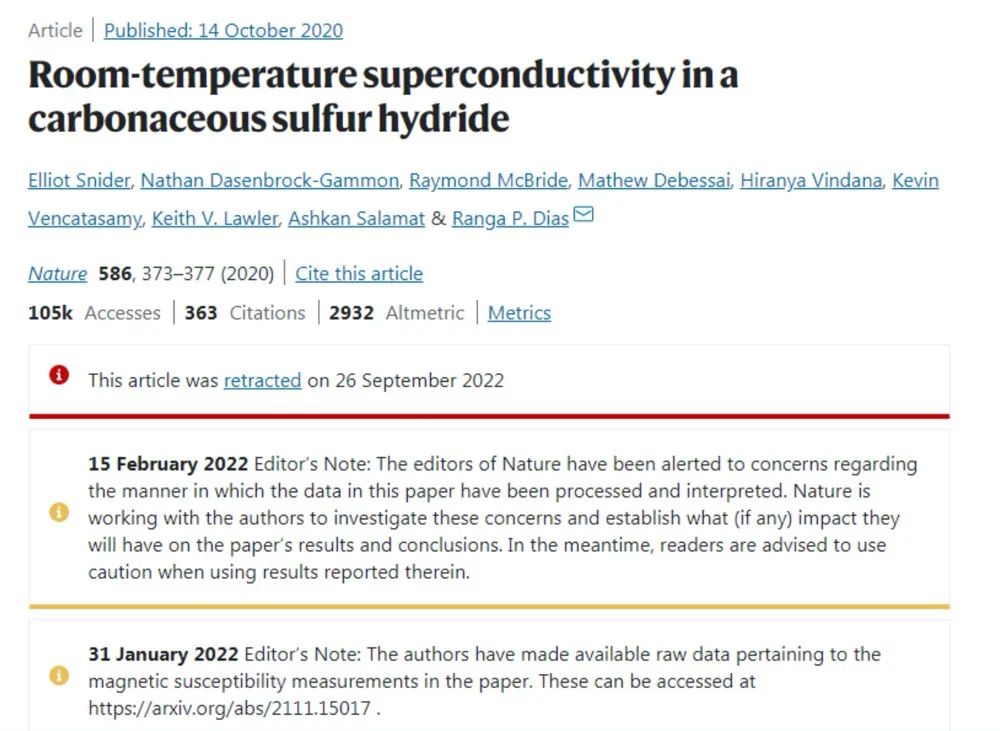 On February 15, 2022, Nature attached an editorial note to the paper, stating that it is investigating data issues in the paper, and readers are advised to exercise caution when citing.

Controversy continues, and an expert who slammed the study has been 'muted'

In the past two years, debates about room temperature superconductivity have arisen one after another.

Jorge Hirsch, a theoretical physicist at the University of California, San Diego, is one of the skeptics of the results, making a strong case. He believes that some of the data published by paper author Dias and physicist Ashkan Salamat of the University of Nevada, Las Vegas may be deceiving. "I think they are fabricated."

Hirsch also noted that the data in the paper also bears suspicious similarities to data in a 2009 Physical Review Letters paper on europium superconductivity at high pressure. The study was retracted last year due to inaccurate magnetic susceptibility data. 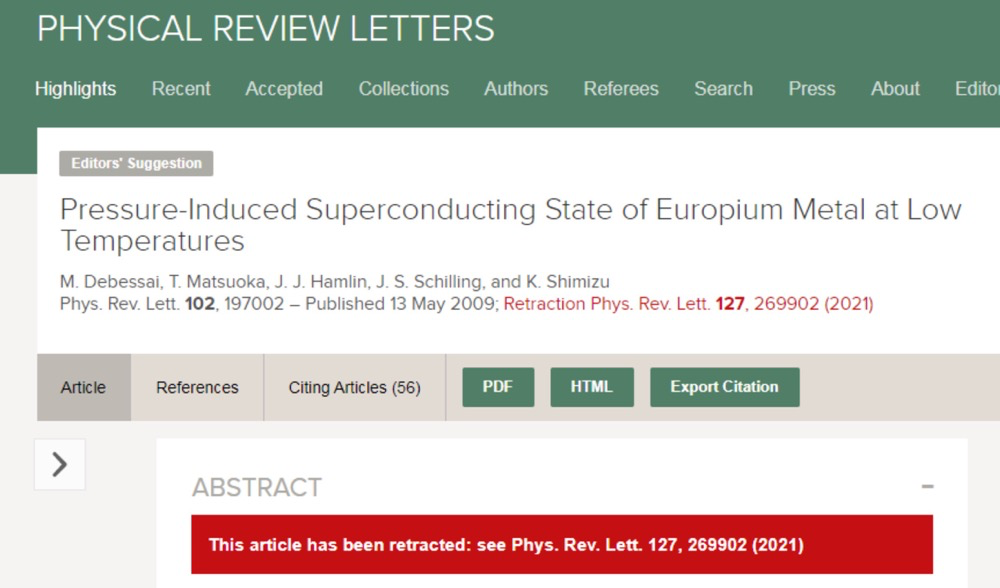 A month after the paper on room temperature superconductivity was published, Hirsch asked Dias, the author of the paper, for some raw data from the experiment, and wanted to find out what the research results were, but was repeatedly rejected. But Hirsch didn't stop there, getting some data from co-authors of the room-temperature superconductivity study.

In August 2021, Hirsch published an analysis article on the possible academic falsification of the AC susceptibility of room temperature superconductors on the well-known preprint servers arXiv and Physica C, which started a series of fierce attacks. However, this "fake" article was removed by Physica C in November and arXiv in December.

There was a lot of hype on the topic at the time, and in response to some of the criticism, Dias and Salamat published a paper on arXiv in November 2021 containing some raw sensitivity data. But Cornell University quantum materials physicist Brad Ramshaw said: "It raises more questions than it solves. The process from raw data to published data is very opaque."

In December 2021, Hirsch responded to Dias and Salamat by dissecting the data again and submitting several related analysis papers.

However, arXiv not only deleted Hirsch's papers, but even banned him from posting articles on arXiv in February this year, "blocking" for up to 6 months.

Hirsch complained to the University of Rochester, where Dias is based, which said the two investigations found no evidence of scientific misconduct. This month, Hirsch and another skeptic, Dirk van der Marel, a condensed matter physicist at the University of Geneva, published their conclusions, arguing that the sensitivity data in the Dias study was "problematic." Dirk van der Marel is very pleased with Nature's retraction.

However, Hirsch argues that retracting papers is not enough. He said it obscured what he called evidence of scientific misconduct, "I think that's the real issue, and it can't be taken lightly."

The findings cannot be replicated, and the authors deny all allegations

Alexander Goncharov, a physicist at the Carnegie Institution for Science, believes Hirsch's concerns about the AC susceptibility measurements are justified. Goncharov tried several times to synthesize this room-temperature superconducting material using Dias' method, but all failed.

Dias denied all allegations, saying Hirsch was not an expert in high-pressure physics. "We believe some of their actions have turned into personal attacks," he said. "We're not going to let people throw mud at us from a distance."

Dias' research may still be true, Eremets said. But he has tried at least 6 times to repeat the result, all unsuccessfully. Although Dias' team has shared the underlying data of the experiment, it said they were reluctant to reveal details, such as what type of carbon they used in the hydrosulfur hydride.

Dias and colleagues remain firm about their work and maintain their claims that the findings are experimentally and theoretically validated.

"We are perplexed and disappointed by the decision of the Nature editorial board." Dias said that they have expressed their strong opposition, but Nature's editors still took the measure of retraction.

Eremets is skeptical that Dias' new superconductor will stand up to scrutiny. He believes that patient researchers will sift through the problematic claims to the true promise of hydrides, based on painstakingly repeated experiments. "Science is not afraid of these things, and the search continues," he said. "Sooner or later the truth will come out."