Why do black holes glow brightly? Scientists at home and abroad uncover the mystery of the most powerful particle accelerator in the universe

A blazar is a special type of active galactic nucleus: a supermassive black hole is believed to exist in the center of its galaxy; it ejects a stream of magnetized plasma flying close to the speed of light—blazar jets—to the direction of the earth. The latter is believed to be one of the most powerful particle accelerators in the entire universe; its blaze can be as bright as 100 billion suns.

Most of the light from blazars is produced by energetic particles in their jets with energies up to 1TeV (10^12eV). How its particles are accelerated to such high energies has been a mystery, although its jets are known to ultimately be powered by the supermassive black hole at the center of the galaxy .

By observing and studying the polarization of X-ray bands, scientists are trying to unravel the mystery of the above-mentioned particle acceleration mechanism.

In the early morning of November 24, a paper published online by the international academic journal Nature, based on the results of two observations of the blazar Markarian 501 (Mrk501) at the beginning of March and the end of March 2022, gave The speculation: Radiation from jets of ultrafast particles ejected from supermassive black holes suggests that these particles are accelerated by shock waves propagating outward from the jet.

This discovery may help people understand more about the high-energy radiation process of black hole systems.

The above paper is titled Polarized blazar X-rays imply particle acceleration in shocks.

The corresponding author of the paper is Ioannis Liodakis of the University of Turku, Finland, and the Finnish Astronomy Center of the European Southern Observatory (ESO). Including Xie Fei, an associate professor at the School of Physical Science and Engineering Technology of Guangxi University and the Guangxi Key Laboratory of Relativistic Astrophysics, there are a total of 124 signed authors of the paper .

Black holes are considered to be the most extreme super objects in the universe. It greedily devours almost everything around it, making it difficult to be directly observed. The above findings demonstrate how different polarization measurement methods can be used to probe the conditions of supermassive black hole systems.

On November 23, Yosuke Mizuno , who did not participate in the above-mentioned research, was an associate professor of the Dean of Physics and Astronomy at Shanghai Jiaotong University, and a Li Zhengdao scholar in the Astronomy and Astrophysics Research Department of the Li Zhengdao Research Institute, told The Paper (www.thepaper .cn), X-ray polarization is actually difficult to detect. But the new satellite X-ray Imaging Polarization Probe (IXPE), which is designed to observe the polarization of X-rays, can measure the linear polarization and polarization angle of X-rays very accurately. The above paper shows a very interesting result: the linear polarization of the relativistic jet of the blazar Markarian 501 (Mrk501) in the X-ray band is about 10%, which is 2 times higher than that in the optical band. This result hints at a particle acceleration mechanism in its relativistic jet.

According to previous reports by The Paper, on December 9, 2021, the SpaceX Falcon 9 rocket launched the X-ray Imaging Polarization Probe (IXPE) for NASA at the Kennedy Space Center in Florida. The detector images incoming X-rays and measures polarization parameters. "IXPE will tell us more about the precise nature of cosmic X-ray sources than just studying their brightness and spectrum," said IXPE principal investigator Martin Weisskopf. X-rays are high-energy light with very short wavelengths. , due to the obstruction of the earth's atmosphere, X-rays from cosmic objects can only be observed through space telescopes.

Yosuke Mizuno further explained to The Paper that the relativistic jet of the blazar is a collimated plasma flow emitted from the vicinity of the black hole at a relativistic speed (close to the speed of light). It consists of a fully ionized gas, but its exact composition is still undetermined, and there is debate about whether it is an electron-ion, or an electron-positron. 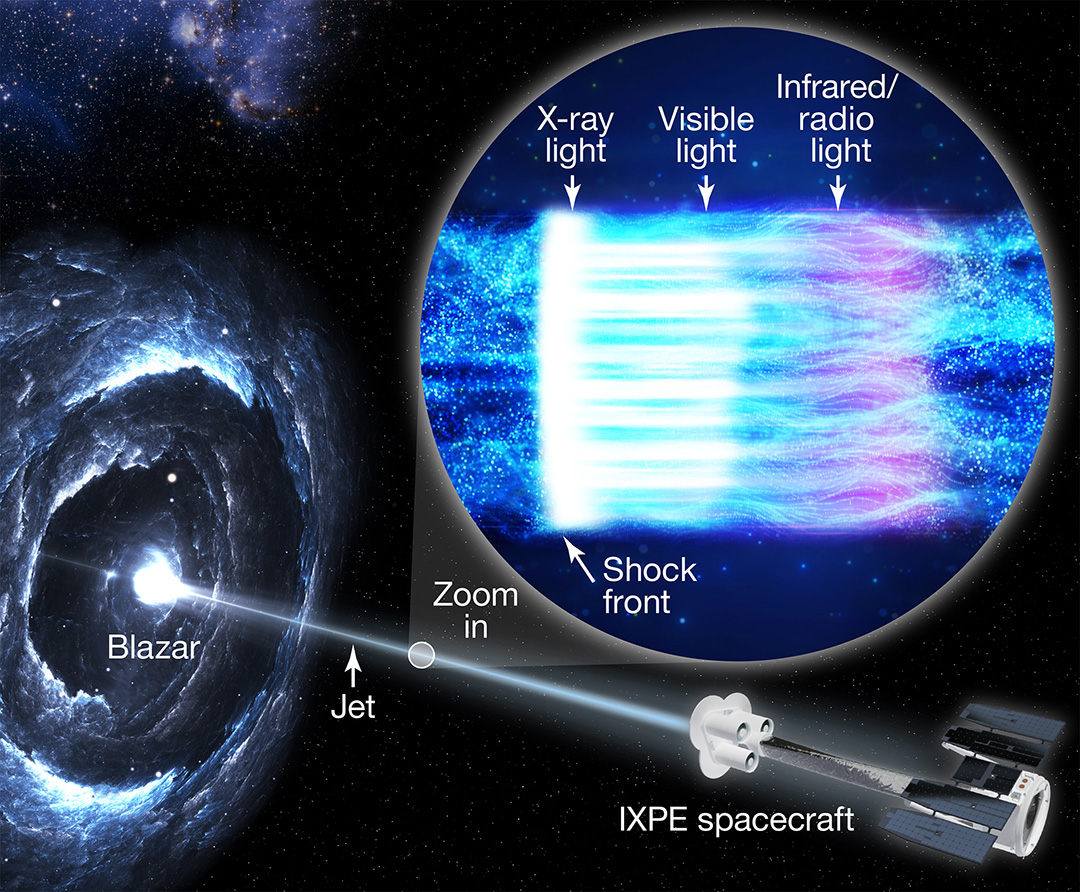 IXPE is observing the Markarian 501 blazar. When energetic particles (blue) in a jet collide with a shock wave (shock wave, white), the particles become energized and emit X-rays as they accelerate. Image via Pablo Garcia (NASA Marshall Space Flight Center)

Why are the particles in the jet accelerated by the shock wave?

Yosuke Mizuno said that the intermittent injection of matter and energy brought disturbances to the base of the jet (where the jet forms). As the disturbance propagates downstream of the jet, it becomes a shock wave and then becomes advection. The particles are accelerated by the so-called Fermi acceleration mechanism, where the particles collide with oscillating "walls": Charged particles are accelerated by repeated reflections between shock waves due to the magnetic mirror effect.

Consider, says Mizuno, a charged particle traveling through a shock wave. If it is bumped in a moving changing magnetic field, it will be reflected back with a greater velocity, say from downstream to upstream. Such multiple reflections greatly increase its energy.

"There are huge black holes in the centers of most of the 200 billion galaxies in the universe - black holes as big as 1 billion suns. Many are dormant, but some are growing." Department of Astronomy, Yale University, NASA Lea Marcotulli, an Einstein postdoctoral researcher, commented that the results in the above-mentioned newly published paper are a turning point in people's understanding of blazars, "X-ray polarization now allows us to study several of these blazars. jet-like jets to understand whether such shock waves are common to all sources."

In addition, she writes, blazar jets are among the most powerful particle accelerators in the entire universe, providing a kind of "laboratory" that cannot be achieved on Earth.

In addition to the problem of the particle acceleration mechanism in the jet, another problem that Yosuke Mizuno is interested in is "the magnetic field situation at the jet launch location".

Chinese scholars have also made new achievements in the field of blazar research.

According to the official website of the Chinese Academy of Sciences, on January 3, 2020, The Astrophysical Journal, an international astrophysical journal, published online the research results of Feng Haicheng, a doctoral student at the Yunnan Astronomical Observatory of the Chinese Academy of Sciences, researcher Liu Hongtao and their collaborators. Relying on the 2.4-meter telescope of the Lijiang Astronomical Observatory, the research carried out a correlation study between the blazar light change and the color change by observing the quasi-simultaneous spectral changes and photometric light changes of the blazars. Both spectroscopic and photometric observations have found the phenomenon of brightening and turning blue (BWB), and there is a strong correlation between color and brightness, color change rate and brightness change rate, and the color change is ahead of the brightness change. These new discoveries can enable people to better understand the radiation mechanism and light change mechanism in blazars.

The official website of the Shanghai Astronomical Observatory of the Chinese Academy of Sciences announced on November 3, 2018 that a type of supermassive black hole is in an active state, devouring the surrounding matter, forming a belt (accretion disk), and emitting bright light. This type of supermassive black hole called active galactic nuclei. Studies have shown that 10% of them will eject matter and energy in a direction nearly perpendicular to the belt, at a speed close to the speed of light. When the jet is directed towards us, due to relativistic effects, the light emitted by the jet is usually stronger than that of the entire galaxy. Such active galactic nuclei are called blazars. A research team led by researcher Wang Zhongxiang at the Shanghai Astronomical Observatory of the Chinese Academy of Sciences discovered that the gamma-ray radiation emitted by a blazar, numbered PKS 2247-131, is regularly brightening and dimming, changing once more than a month. This is the only quasi-periodic oscillation event with a monthly period observed by the Fermi satellite so far. His papers were accepted and published by the international academic journal Nature Communications.